Tick-borne diseases are increasing in incidence.

According to the Centers for Disease Control and Prevention, state and local health departments in 2017 have reported a record number of cases of tickborne disease. 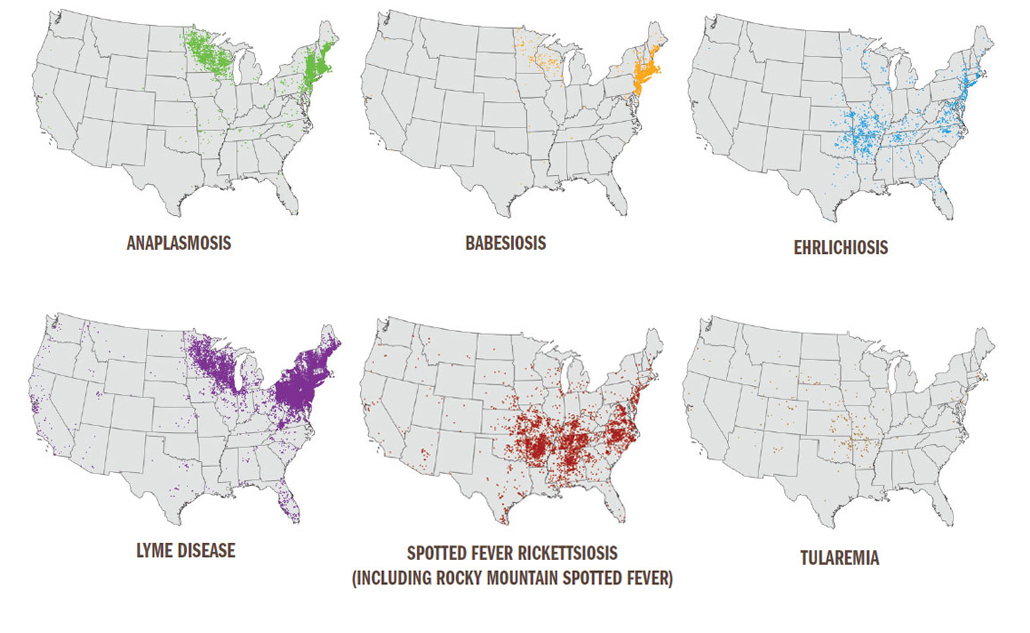 NOTE: Each dot represents one case. Cases are reported from the infected person’s county of residence, not necessarily the place where they were infected.

NOTE: In 2016, no cases of tickborne illness were reported from Hawaii. In 2016, Alaska reported 6 travel-related cases of Lyme disease and 1 case of tularemia.

NOTE: Anaplasmosis and ehrlichiosis were not reportable in Colorado, Idaho, New Mexico, Alaska, Hawaii in 2016.

NOTE: Spotted fever Rickettsiosis was not reportable in Alaska and Hawaii in 2016.

Discerning the correct diagnosis can be challenging and lengthy. The CDC recommends a two-tier serological testing methodology that relies on the detection of antibodies. While these guidelines are effective in many situations, serological tests are known to be insensitive during the first few weeks of infection. Also, it is specific to Lyme disease and does not address other tick-borne diseases.

Advances in technology such as Polymerase Chain Reaction (PCR) allow for the potential detection of tick-borne organisms before anitbody responses are detectable. Testing technology combines serology for B. burgdorferi (Lyme) and PCR testing for Borrelia species* and may offer a greater opportunity to detect evidence of infection, since serology alone may be insensitive in the first few weeks, ** PCR also provides the opportunity to detect other tick-borne infections.

The incidence of different tick-borne disease varies by area, that is why it is important to tailor testing to regional needs. Feel confident providing patients with fast, comprehensive testing to detect infections caused by ticks in your area.

Anitbody capture (IgM, IgG and IgA) EIA for detection of antibody to B. burgdorferi.

With 70 years of experience serving the Rhode Island, Southeastern Massachusetts  and Eastern Connecticut area, we know there are  some of the most beautiful parks and beaches in the country. But, according to statistics compiled by the Centers for Disease Control and Prevention, given those states’ small sizes, there was a relatively high incidence of confirmed Lyme Disease cases in 2016, as compared to other states.

East Side Clinical Laboratory is proud to partner with Accutix to provide physicians with the latest generation of tick-borne disease testing for both acutely and chronically ill patients.

Because your patients should be enjoying the outdoors, not worrying about their health, they deserve the most sensitive and specific testing available. East Side Clinical Laboratory offers a broad menu of seasonal testing, including:

Because getting it right is so important.